Modelling water use in regional Queensland

As water security is such a critical issue for regional Queensland communities and a key driver of capital investment, QWRAP funded a research project to better understand the drivers and diversity across the state.

The research was developed to test and validate a water prediction model developed by Mackay Regional Council and used to predict water use across a range of Queensland communities. The model predicts daily water production based on two climatic variables namely rainfall and evapotranspiration.

Figure: Actual and predicted water production in Mackay between 2009 and 2015 showing good alignment despite significant variation in climatic factors, water use (and occasional missing data).

Capital expenditure is the key cost driver for water and sewerage service providers, and uncertainty surrounding future water use often introduces risk in asset decision making resulting in conservative decisions surrounding the construction of trunk water infrastructure. By improving the understanding of current and future water demand, it is proposed that future operational and capital costs can be better managed. Further, understanding the variability and drivers of water use across Queensland’s diverse communities can provide insights into optimal demand management strategies in different towns. 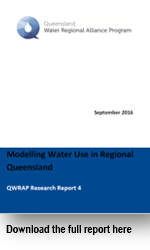