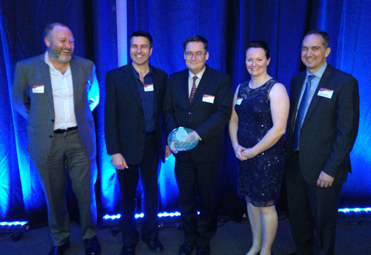 One of our busiest weeks of the year was finished off with the AWA Gala Dinner on 7 September and recognition through two awards.  Despite a few historical finalists, this is actually the first time the Directorate has been successful in winning an award.

The Queensland Water Regional Alliance Program (QWRAP) received the Program Innovation – over 250,000 users award, nominated through the program sponsor, the Department of Natural Resources, Mines and Energy.  In accepting, David Wiskar, Executive Director Policy acknowledged the efforts of LGAQ and qldwater and all contributing councils and staff in championing regional collaboration for the sector.

QWRAP has been in place since 2011 and with thanks to the sustained efforts of LGAQ and participating councils, has received a grant from the Department of Natural Resources, Mines and Energy for a further four years commencing 1 July 2018.  The grant provides financial support for only the five most mature regions which has created uncertainty about the future of efforts being built in North and Central Queensland, and growing interest in North-West Queensland.  qldwater will continue to support activities in these locations and advocate for inclusion in the broader program.

The ongoing funding was supported in part by an independent review of the QWRAP by Deloitte Access Economics. The review concluded that “QWRAP represents a potentially effective mechanism to develop regional economies of scale to realise the four dimensions of water security, reliability of supply, water quality and appropriate water pricing.”  It suggested that benefits from the program to date are likely to range from $1.9 million to $4.0 million, but also noted significant data gaps in benefit data suggesting a much higher return on investment.

Dr Rob Fearon was recognised with the AWA Regional Service Award acknowledging his pivotal role with QWRAP, along with many years additional service to the sector.

Starting with qldwater in 2006 as CEO and now as Director, Innovation Partnerships, Rob’s enthusiasm for promoting and developing the industry are well known and demonstrated by his support for programs and projects which ultimately improve the capacity of our members.  His strategic foresight, technical understanding, and policy and government experience are core to the success of the Directorate.

Rob was keen to share the success with our team, and key stakeholders including our TRG, members and the LGAQ.

Congratulations to all of the award recipients and nominees, including qldwater member organisations which featured in 8 of the 10 awards.