The quest to find Queensland's best

The quest to find Queensland's best 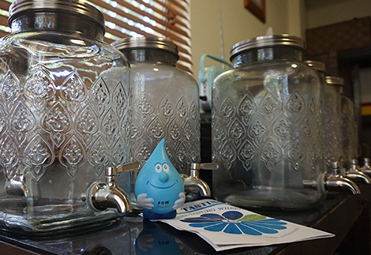 Craft beer is all the rage these days with good old H2O making up around 95% of the product. The taste and character of any brew - including your morning cuppa - will vary depending on the minerals and chemicals found in your local water, and good water plays a crucial part in the happiness index of any community.

On Wednesday, 5 September 2018 between 12.30 to 1.15 pm, the best tap water from across Queensland will go head to head in a blind taste-off as part of the 2018 Ixom Best of the Best Queensland Water Taste Test.

Hosted in conjunction with the Queensland Water Directorate (qldwater) fifth Annual Forum in the Corporate Suites at the Aquis Gold Coast Turf Club, around 80 forum delegates will put their senses to the test, judging entries from around Queensland by colour, odour and taste. The winner will be announced at 1.25pm.

qldwater CEO Dave Cameron said that while the Queensland competition had been running for several years, it has now grown to become a coveted national competition with the Water Industry Operators Association (WIOA) introducing it in NSW, ACT, South Australia, Victoria and Tasmania.

Queensland reigned supreme for the first four years, taking out the Water of Origin series from 2014 to 2017 before the current Queensland champion, Livingstone Shire Council, was ousted by Port Macquarie Hastings this year.

But Livingstone walked away smiling anyway, since their winning water was immortalised in a very tasty limited edition craft beer - Livingstone Lager with a tropical twist of Pineapple.

Previous champion Toowoomba Regional Council basked in glory for over a year, first taking out the 2016 Queensland title, then the 2017 Water of Origin against NSW before finally claiming the Ixom Best Tap Water in Australia competition in 2017. Their winning water then went on to represent Australia at the International Water Tasting Competition held in Berkeley Springs, USA in February 2018.

"The taste test is about more than just how good the water tastes: it is a way to help inform the community about how much effort goes into providing quality drinking water &ndash; an essential, sustainable service provided 24/7 by the staff of our local water utilities," Mr Cameron said.

The taste test forms part of the qldwater Annual Forum on 5 to 6 September that brings together water and sewerage service providers, other industry representatives and government departments to look at ways of dealing with future urban water challenges in a constrained funding environment.

Day one of the forum also includes a technical tour of the Gold Coast Commonwealth Games infrastructure before returning to the Turf Club for a range of local presentations and the second annual Vendor Pitch challenge, with proceeds going to support scholarships for representatives from small and remote councils to attend future forums.

The beer theme continues with dinner speakers from Lion outlining the company's journey from manual plants to state of the art processes to create some of Australia's finest drops. We look forward to hearing more tricks of the trade in turning award winning water into award winning brews!

ABOUT THE QUEENSLAND WATER INDUSTRY AND PREVIOUS WINNERS

There are over 70 drinking water service providers in Queensland and over 370 community water supplies.  Queensland has more people living in outer regional areas than any other state in Australia, and most of this dispersed population rely on local government to provide water and sewerage services.  Not surprisingly, many of the communities served are small. In fact two thirds of the potable supplies are for towns with fewer than 1,000 residents. Half service fewer than 500 people.