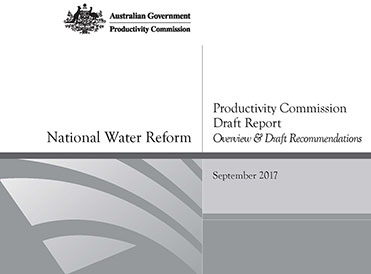 The Productivity Commission has released its draft report for the National Water Reform Inquiry which is available for public consultation and input. Members are encouraged to consider an individual written response to the Commission by Thursday 19 October or to raise issues for consideration in qldwater’s submission to Dave Cameron or Rob Fearon by Monday 9 October.

The draft, as expected, seeks to continue national reform in the urban water sector, includes a focus on economic regulation and challenges facing regional and remote service providers.

The final report is expected to be handed to the Australian Government by 31 December.  A public hearing will be held in Brisbane on 19 October.

The draft report and information on making a submission is available here: http://www.pc.gov.au/inquiries/current/water-reform/draft