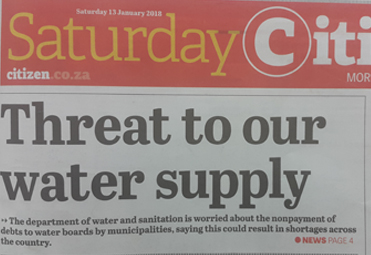 I returned from a recent trip to South Africa with a renewed sense of gratitude for the place I now call home. Since my return I find myself questioning the lackadaisical way in which we use water at home - as a family we have lived on boats and know how to make a small amount of water go a long way, but because water runs so freely from our taps it gives the impression that there’s plenty around.  It’s only when the taps run dry that the reality hits home, and this is exactly what four million people living in Cape Town will be facing as Day Zero approaches.

It wasn’t that long ago that South Africa was touted as leaders in the water industry, but a lack of funding and leadership and the plundering of the public purse has left the country in dire straits.

Newspaper headlines in the Gauteng Province blamed municipalities for racking up billions of Rands worth of debt in not paying their bulk water fees, causing these bodies “to implode, resulting in water shortages and taps drying up”.

“Rand Water’s financial viability is under severe threat, to the extent where it might be unable to fund future bulk water facilities or repair ageing infrastructure which wastes millions of litres of water a month,” the article stated.

When Rand Water restricted supply, violent protests broke out and the mayor of Emfuleni, along with councillors and municipal officials, had to use their vehicles to blockade the entrance to Rand Water’s headquarters.

But the water woes in the country’s north are nothing compared to the state of emergency playing out in the Western Cape Province, where Cape Town is set to become the first city in the world to run out of water. The scary thing is that it probably won’t be the last.

Last week the Premier of the Western Cape Province provided a chilling account of the water crisis in Cape Town and how the city is preparing for Day Zero. Sometime in April the underground water pipe network will be shut down and residents will need to collect water from 200 Points of Distribution (PoDs) across the city. The maximum allocation will be 25 litres per person per day, distributed on the assumption that an average family comprises four persons. This will be a logistical nightmare. The person collecting the water will need proof of identification, the need for transport to get 100 litres of water back home, not to mention personnel, security and other infrastructure challenges. In the article Premier Zille said “the challenge exceeds anything a major City has had to face anywhere in the world since the Second World War or 9/11”.

Strangely enough, over 50% of residents have all but ignored the restrictions that were set in place a few months ago. Water strategist Anthony Turton blames community apathy on the “the plunder of fiscal resources and the erosion of the institutions of the state” that has led to a breakdown of social bonds between individuals and the community of which they are an integral part.  According to Mr Turton, if the political system only serves the narrow self-interest of the elites manipulating the system, then the same holds true for the frustrated masses.

There are many other factors contributing to the dire state of the water industry in Cape Town, including big increases in population, millions of domestic and international visitors each year and a change in weather patterns associated with climate change.

And there’s a lot more at stake than the mere comfort of water flowing from a tap. 600,000 jobs supporting almost three million people are at risk in the water intensive agricultural and tourism industries. There will be an increased risk of conflicts over access to water, water theft and a high likelihood of an outbreak of disease.

The only hope is that this crisis will trigger the best in humanity. Facebook groups and other campaigns are trying to mobilise the whole community. Offers of support are flooding in with South African Breweries indicating its willingness to assist in the bottling and distribution of water drawn from their Newlands spring.  My friends in Cape Town still hope for some real leadership and solutions to help turn the tide.

So what can we in Australia learn from this dilemma?