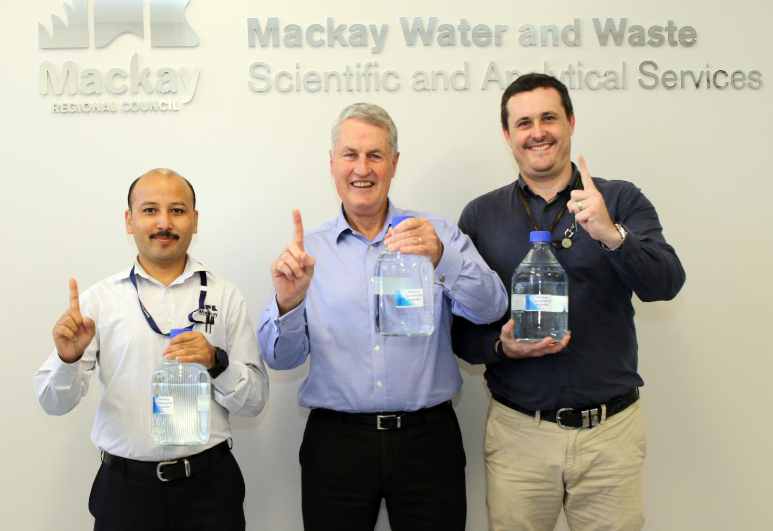 Adapted from the Daily Mercury:

IT IS official - Mackay not only has the best tasting water in Australia but also the second best in the world.

Mackay Regional Council's Director of Engineering and Community Infrastructure Jason Devitt was there with Water Treatment Manager Stuart Boyd, and said it was a tough competition against 18 of the world's best.

"We were only one vote behind California, so it was very very close," he said.

"It was a really good result. I would've been very happy with anything in top five so to get second, I'm very pleased with that."

Beating out over 100 waters from across the globe over three days (from February 20), the final 19 entrants were judged by a panel of 15 on Sunday, on their clarity, taste and odour.

There was also a community element, where locals were invited to try out the water samples themselves and make their own judgments.

"Stuart and I had a go at that ourselves. It was really tough. There was lots of good, quality water," Mr Devitt said.

"We always thought our water was pretty good but to be up there with the best, we could never have expected or anticipated where we would come."

This is not the first time Mackay Regional Council's tap water from the Marian Water Treatment Plant has been commended.

In September 2019, the Marian sample took out the Best of the Best Queensland Water Taste Test at qldwater’s annual forum.

In October, it won the national 5th Ixom Best Tasting Tap Water competition (hosted by the Water Industry Operators Association of Australia) - earning it a spot in the 2020 international competition as the Australian representative.

Despite Australia having yet to win the grand prize, an Aussie water has now won second place for the third time - with Wannon Water and their tap water from Hamilton Water Treatment Plant in Victoria finishing second in 2019 and Marysville Water from Victoria placing second in 2016.

Mr Devitt said the silver medal was all about ensuring Mackay locals knew just how "high quality" the tap water was after the "amount of regulation" and the cheapness compared to bottled water.

He also commended the "unsung heroes" at the Marian treatment plant for their tireless efforts in providing "safe, reliable water" year-round.

Queensland water service providers will have their chance to take on the best in the state (and maybe go one better in the world) in the Sigura Best of the Best Queensland Water Taste Test this September at our annual forum, hosted by Redland City Council.