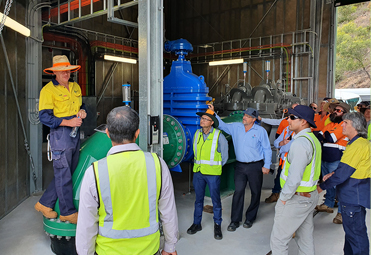 The 5th of November marked a shift in the landscape of the QWRAP regions, with the winding up of the Downs and Surat Basin Water Group in its current form. The formation of the South West Queensland Water and Sewerage Alliance in 2021 has prompted two of the DASB councils, Balonne and Maranoa, to look to the new alliance for the collaboration opportunities that will arise as the group develops.

The remaining four councils - Goondiwindi, Southern Downs, Toowoomba and Western Downs - have agreed to continue to collaborate in a technical capacity, with Maranoa keeping an eye open for opportunities with both groups.

The DASB Water Group formed officially in 2016, commencing with the formation of the DASB Operations Control and Data Management (SCADA) group, and working together on projects in collaborative skills development and alignment of DWQMP audits and review schedules. The inaugural coordinator, John Betts, was appointed the following year to take on the management of the group’s activities. Alan Kleinschmidt assumed that role in 2018. Alan has now taken on the role of Regional Coordinator for the new SWQWSA.

The DASB group has had some significant successes at a technical level, including four projects that were partially funded through the QWRAP bid pool. Two projects in particular have provided the region with a real foundation for the future:

The group has been promoting regional collaboration for workers, holding two Regional Operator Forums. These events, the most recent held on 16 November, provide an opportunity for water and sewerage operators to network, facilitating improved regional safety communication, resilience and knowledge sharing.

The farewell to the old group was celebrated with a dinner at the Toowoomba Burke and Wills Hotel that was attended by DASB Water Group “old hands” and their partners including John Betts, Kevin Flanagan, Alan Kleinschmidt and John Mills.